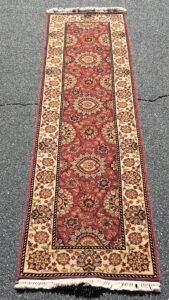 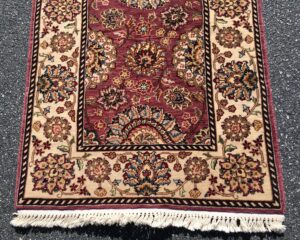 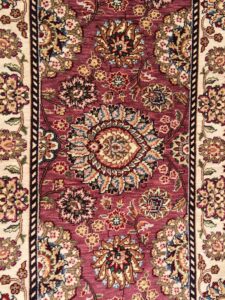 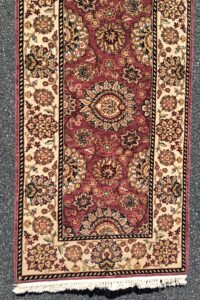 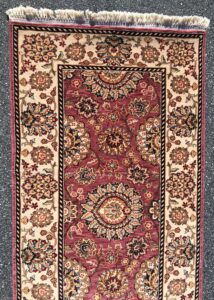 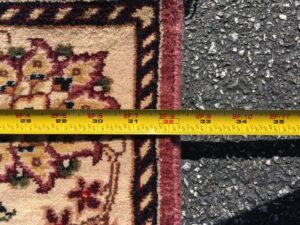 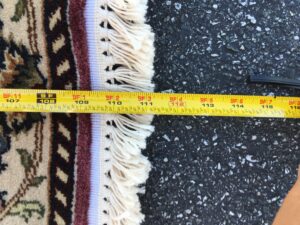 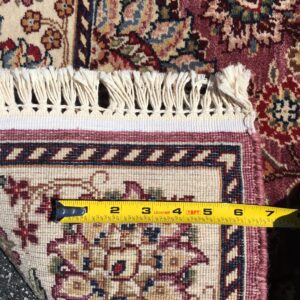 This new 3×9 handknotted runner has a pink field color with a floral design.  The primary border is cream with two navy, red, and cream secondary borders resembling rope surrounding it. Reds, baby blues, yellows, and many other colors, make up the tertiary colors.

Most people do not appreciate the art and the craftsmanship that goes into making a rug by hand. So many steps are involved from shearing the wool, to separating and washing the wool, dying the wool, and spinning it into yarn to be used. Now the hard work begins! This is also where the artistry takes place. A designer will design out the new rug on a piece of paper. Using that design anywhere from one to four craftsman will make the rug using a technique called knotting. It typically takes a minimum of one month to make the simplest of handmade rug and up to two years for the most complex rugs. Most rugs take two to four months. Each rug is then knotted one knot at a time. Lower quality rugs have approximately 80 knots per square inch, an average rug has 150 to 180 knots per square inch, with finer rugs increasing in quality. The finest rugs come in at 300 knots per square inch and higher. The tighter the knot count, the higher the quality of the piece. After the rug is made it is then washed to lock in the colors and dried out in natural sunlight. Last, but not least, the wool is trimmed down to an even pile length prior to being made available for sale. Every step along the way is extremely manually intensive. Each handmade rug takes hundreds of hours to make.